Go to content
Dominican Nuns Ireland
Published by Dominican Nuns Ireland in News and Dominican Life · 28 March 2022
Tags: Jubilee
On this day in 1722 (300 years ago), our Monastery in Drogheda was officially recognised and established by the Master of the Dominican Order at that time. Below is a copy of the English translation of his letter (together with a photo of the original letter from our Archives).
Letter of the Master of the Order – 28th March 1722 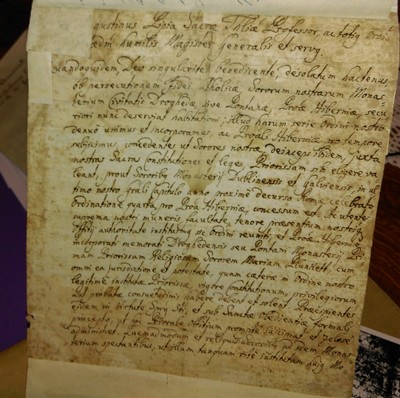 Bro Augustin Pipia, Professor of Sacred Theology and humble Master General and Servant of the entire Order of Preachers
Whereas, by a singular blessing from God, the Monastery of our sisters at Drogheda in the Province of Ireland, hitherto desolated by the persecution of the Catholic Faith, has now attained a securer foundation, we hereby unite and incorporate it anew with the Order and subject it to the Provincial of Ireland for the time being – permitting that our sisters may, henceforth in the same place, elect a prioress for themselves, according to our holy laws and Constitutions, in the same way as it was conceded to the sisters of the Dublin and Galway monasteries by the fourth Ordination (for the Province of Ireland) of the General Chapter held at Rome during the last year.  And using the high faculty of our Office we, by the tenor of these present, and in virtue of our Authority, do institute as first Prioress of the Monastery of Drogheda, thus reunited to the Order and incorporated with the Province of Ireland, Sr Mary Plunkett, with the same jurisdiction and authority, which the other prioresses legitimately appointed ought and are accustomed to have, by virtue of the Constitutions, Privileges, or any approved Customs.
Commanding her by virtue of the Holy Ghost, and under the formal precept of holy Obedience, that she do promptly undertake and religiously discharge this Prioral Office.  As also the religious sisters of the same monastery, that they do acknowledge and have her as their lawfully constituted Prioress and do show her due obedience and filial respect in all things.  In the name of the Father and of the Son and of the Holy Ghost.  Amen.
Anything to the contrary being of no effect.  In testimony whereof we, having signed these with our own hand, have ordered the seal of our office to be attached therewith.
At Rome, in our Convent of Saint Mary on the Minerva
March 28th 1722