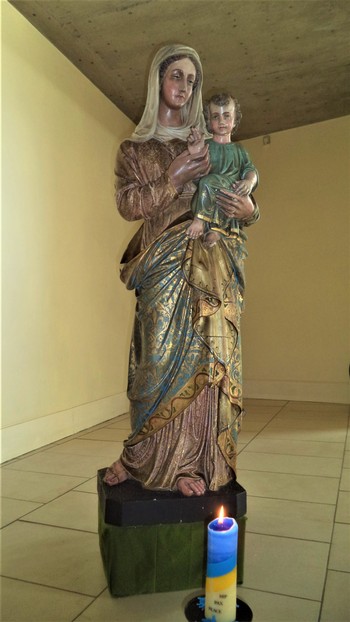 We often hear the phrase ‘the war is being fought on two fronts.’ This is as true for the war in the Ukraine as it is for any previous war. But there is also a deeper sense in which this war is being fought on two fronts. There is a battle going on between light and darkness, between good and evil, between grace and sin. It has never been put any better than it was by St. James over 2000 years ago. “Where do all these battles between your selves begin? Is it not in your own hearts? Is it not your passions that are at war in your members? You desire and you do not have, so you kill. And you covet, and you cannot obtain so you fight and wage war. Where jealousy and selfish ambition exist, there will be disorder and every vile practice.” He goes on to say, “but the wisdom that comes from above is marked chiefly by its peacefulness.” It is peaceable.
We are I think, all of us overwhelmed by the atrocities being perpetrated in the Ukraine. We feel helpless in the face of so much meaningless suffering. But we Christians are not powerless before it. As an old hymn puts it “We stand for God and for His Glory. The Lord supreme and God of all; Against his foes we raise his standard; Around the Cross we hear his call.” We are part of a mighty army and our weapon is prayer.
This year we celebrate 300 years since our foundation. Mother Catherine Plunkett our Foundress and our founding Sisters lived their vocation in the middle of a situation not unlike that in the Ukraine today. Discovery that they were Catholic nuns would have meant certain death. They lived in the midst of tyranny, bloodshed and  death on a daily basis and they gave their lives for reconciliation and peace. This is the rock from which we were hewn. This is our legacy. Let us celebrate our 300th anniversary by being more fully who we are called to be – lights in the darkness. 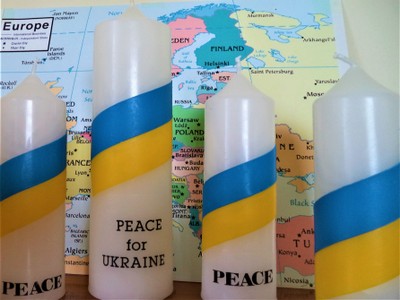 Darkness seems to be closing in over our world. The forces of evil appear to be in the ascendency. But we know the Jesus is the Light in the darkness, the Light that darkness cannot overcome. We light our lives by Jesus.  Let us be lights in the darkness also. Even a sliver of light coming from under a door can reveal  a way out of a darkened room into the fullness of that light. This is the faith that the war in the Ukraine challenges us to live by. In a world that has lost sight of god we are called in and through Jesus to light up the way back to Him.
St. James in his letter already quoted goes on to say that faith without works is dead. What are the works that proclaim our faith, give substance to it, make it to be effective? I think the answer to that is and always will be CHARITY 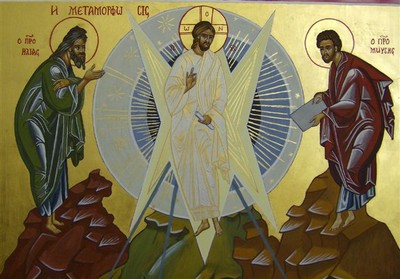 In the Gospel of the Transfiguration we hear the Father say of Jesus ‘This is my beloved Son listen to him’.  This is how we light our lives from Jesus, by putting into action his commandments and the greatest of these is ‘This is my commandment love one another as I have loved you’.
In the Sermon on the Mount we receive a blue print, a master plan, that we should be pouring over during these times. It is our strategy for winning the war of grace over sin and death, light over darkness. Let us take to heart St. James words to heart for they are as true for each of us as they are for those fighting in the Ukraine. Where does any discord among us begin- in MY own heart. I have power to help put an end to war by my choices. These are the ‘works’ that need to accompany my prayer and my faith. The defeat of evil will not happen because of my emotional response as I sit before the TV, my tears at the plight of those sufferings. It will come about by my choice of virtue over vice in my daily life, my choice of selflessness over selfishness, the triumph of god’s grace over sin in my life.
When I was a novice I read a very powerful statement by Rene Voillume, which has become the bedrock to my understanding of my apostolate as a Dominican nun. This is not a direct quote but as I remember it he said ‘ our personal encounter and response to God, is also the greatest good for each individual on earth, at whatever stage of development he may be.’
We are, I think, challenged by the war in the Ukraine to live out of the truth of that statement. The life and death of each one of us has its influence for good or ill on all the others.  My real level of my concern for the people in the Ukraine will be seen in my next choice and the one after that. Am I by my way of living going to contribute to the war or be part of its resolution?