Fondly know as “The Siena” by the town’s people, the Monastery of saint Catherine of Siena has been part of Drogheda’s history for three hundred years. On this day 300 years ago we received official recognition from the master of the Order.
From our first beginnings in 1722 in a humble mud cabin on the banks of the Boyne to our present location in the Twenties our praying presence has enfolded the town and radiated the presence of God to the very ends of the earth. It is this consistent praying presence that we would like to honour and give thanks for, in this celebration of our third centenary.
It is significant for our own times, to set our beginnings in their historical context. Few dates in Irish History are better known than 1690. No Irish battle,  and there were many, is more famous than William III’s victory over James II at the river Boyne, a few miles west of Drogheda. The defeat of the Catholic forces brought a new wave of religious persecution. A new act suppressing friaries, monasteries etc. was enacted. In 1722 the foundress of our Community freely chose to return from the safety of Europe to her homeland where Religious persecution was rife. This valiant woman and her companions lived with a death threat over their heads should the forces of the Crown be made aware of their presence. Should we be surprised by such courage? Not in the least. These nuns were simply continuing in a long line of Catholics willing to die for their faith, such was their love for God and his Holy Church. Indeed Mother Catherine Plunkett the foundress of our Monastery was herself the grand niece of St. Oliver Plunkett, Archbishop of Armagh and Primate of All Ireland who was executed in 1681. No doubt the stories she heard about her saintly uncle who was hung, drawn and quartered for his faith inspired her and had an influence on her choice of vocation. It had been thought by the Authorities that the execution of the head of the Catholic Church in Ireland would serve as a death knell to the faith but as always the blood shed by martyrs brings renewal not death and brings forth in grace such dedication as seen in Siena’s first nuns. 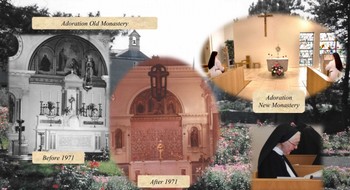 So how did it come about that Catherine returned to her native soil and why did she leave it to begin with? It happened like this.  The Religious persecution after 1690 was not the first wave of anti Catholic feeling. Monasteries had already been suppressed by Henry V111 and by the penal laws. Their members were dispersed and forbidden to live in Community or to wear religious dress. But they had bound themselves to Christ by bonds that could never be broken and the defied all State laws.  A Dominican Community in Galway founded in 1644, however, was forced to leave Ireland in 1652 and go to Spain to continue their Religious Life. But, when anti Catholic laws were relaxed for a short period under King James 11, himself a Catholic, two of the community returned and refounded the convent in Galway.
This brief peaceful interlude didn’t last long. The battle of the Boyne put paid to any possibility of peaceful co existence, if anything the persecution after 1690 was more severe than ever. It is true that the Treaty of Limerick in 1691 promised that Catholics would have the right to practice their Faith in peace but unfortunately the treaty was no sooner made than broken. The Government began to pass so called Penal Laws which stripped Catholics of all their civil and religious. This situation continued for a whole century.
This was the back drop to Catherine’s early years. She was born in 1690, the very year of the Battle of the Boyne. Her parents who had been wealthy land owners chose, to lose their lands rather than retain their property and possessions by becoming Protestant. This strong faith left its mark on Catherine and her sister Margaret. Although they had never been in contact with nuns Catherine felt called to give herself totally to God. When she heard about the community in Galway, she decided to ask permission to enter their Convent. Her Sister Margaret went with her.  On November 1st 1709, having been in the Community for about a year, Catherine and her sister were professed. For the following eight years they shared in the life of the Community and remained faithful through very turbulent times.  In 1714, worn down by constant persecution and having been dispersed three times in a short space of time, they decided to respond to the suggestion of the Provincial, Fr Hugh Callanan that they seek refuge in Dublin.  Fr Callanan had a short time before visited the Convent only to find it occupied by soldiers and the nuns scattered all over the city and neighbourhood. A list was drawn up of eight nuns who were willing to be the nucleus of the Dublin Convent. The two Plunkett Sisters were on that list. It was three years before the actual move took place. In March 1717  the Sisters took up temporary accommodation in Fisher’s lane, Dublin, moving in September of that same year to  a more suitable house in Channel row. Sr Catherine did not join them in their new home. Instead she travelled to Brussels   where there was a thriving English speaking Dominican Monastery. Here, Catherine was able for the first time to experience Dominican Contemplative life in its fullness. 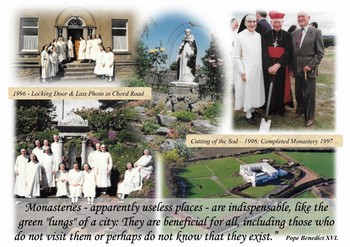 In 1721, by now well grounded and formed in all aspects of Regular life in Community Catherine was asked by Fr. Stephan Mc Mahon, the Irish Provincial  to return to her native soil, indeed to her own home town to found a Monastery of Dominican Nuns. This request had the full backing and support of the Archbishop of Armagh. Within a few months of her return the new “Monastery”, a little mud cabin on the banks of the Boyne, was up and running.  As early as March 28th 1722, Fr Agostino Pipa, master of the Order at the time, wrote a formal letter, recognising the new convent and incorporating it into the Order, giving “ Mother Catherine Plunkett, the same jurisdiction and authority which the other Prioresses legitimately appointed are accustomed to have. “
A far cry from the steady tranquil life in Brussels, Mother Catherine  was once again forced to live incognito and she and her little community, dressed in lay clothes during the day. At night when the doors were locked they donned their habits for the recitation of the night Office.  Each morning before dawn, to avoid being observed, a Dominican priest risked his life to provide Holy Mass for the nuns.  The Sisters observed the rule as fully as possible in their circumstances.  Although contrary to the ideal of Dominican Contemplative life, the community opened a school for poor girls. This may perhaps have been the very first catholic school for girls in Ireland at that time. This served a twofold purpose. It answered a very pressing need of the time for Catholic education and it helped keep suspicion as to the true identity of the nuns at bay.
In 1725 needing more space, the community moved to Dyer Street in the centre of the town. Here they opened a boarding school for girls of well to do families. They called their premises a boarding house to account for the growing number of postulants who were living in the house and were obviously too old to be school girls. 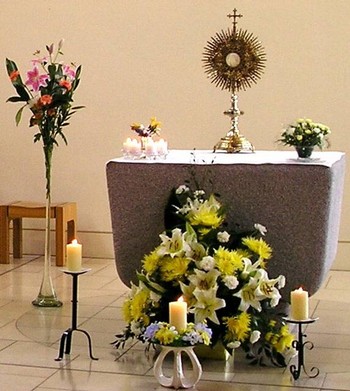 Mother Catherine died in 1657, aged 67. She left behind in dyer Street a strong community, both numerically and spiritually. Her lasting legacy was the desire she instilled in them to be free for God alone, the ideal of Contemplative life as Dominic desired it for his nuns. This they passed on from generation to generation, remaining faithful to the vision our Foundress had of a fully enclosed community, a vision that finally came to fruition in 1920 when we finally closed our school and became  in fact as well as in spirit a Monastery, whose sole apostolate is now, as had always been desired , the worship of God and intercession for the salvation of souls. It was at this time that the Perpetual Adoration of jesus in The Blessed Sacrament was introduced.
The process by which the sisters became what they had always been in spirit was completed in 1930, when on the 8th of December the entire Community made Solemn vows and accepted Papal enclosure.
Our life today is made possible by our departed Sisters’ faithfulness. May we in our turn, by the constancy of our commitment, the purity of our vision and above all our love for God and his children, make of Siena , a Monastery after the heart of Dominic.